Proponents say the plan is essential to ensure Auckland becomes a more liveable city for residents but opponents are predicting 'outrage' amid warnings of more congestion if cycleways take over more car lanes.

While $306 million has so far been allocated, planners are seeking political support for a further $1.7b, plus law changes to increase cycling's share of the transport system and do so safely.

The 7 per cent goal is cycling's share of a 64 per cent reduction in transport emissions contained in the council's climate plan, Te Tāruke-ā-Tāwhiri.

The cycling plan is set out in the Auckland Cycling and Micromobility Programme Business Case being considered by the council's planning committee tomorrow.

"Effective delivery of this programme relies on the parking strategy to support the removal of roadside space, the potential removal of some flush medians and, in some cases, general traffic lanes," said a report to the committee written by Auckland Transport's principal transport planner Jon Kearins. 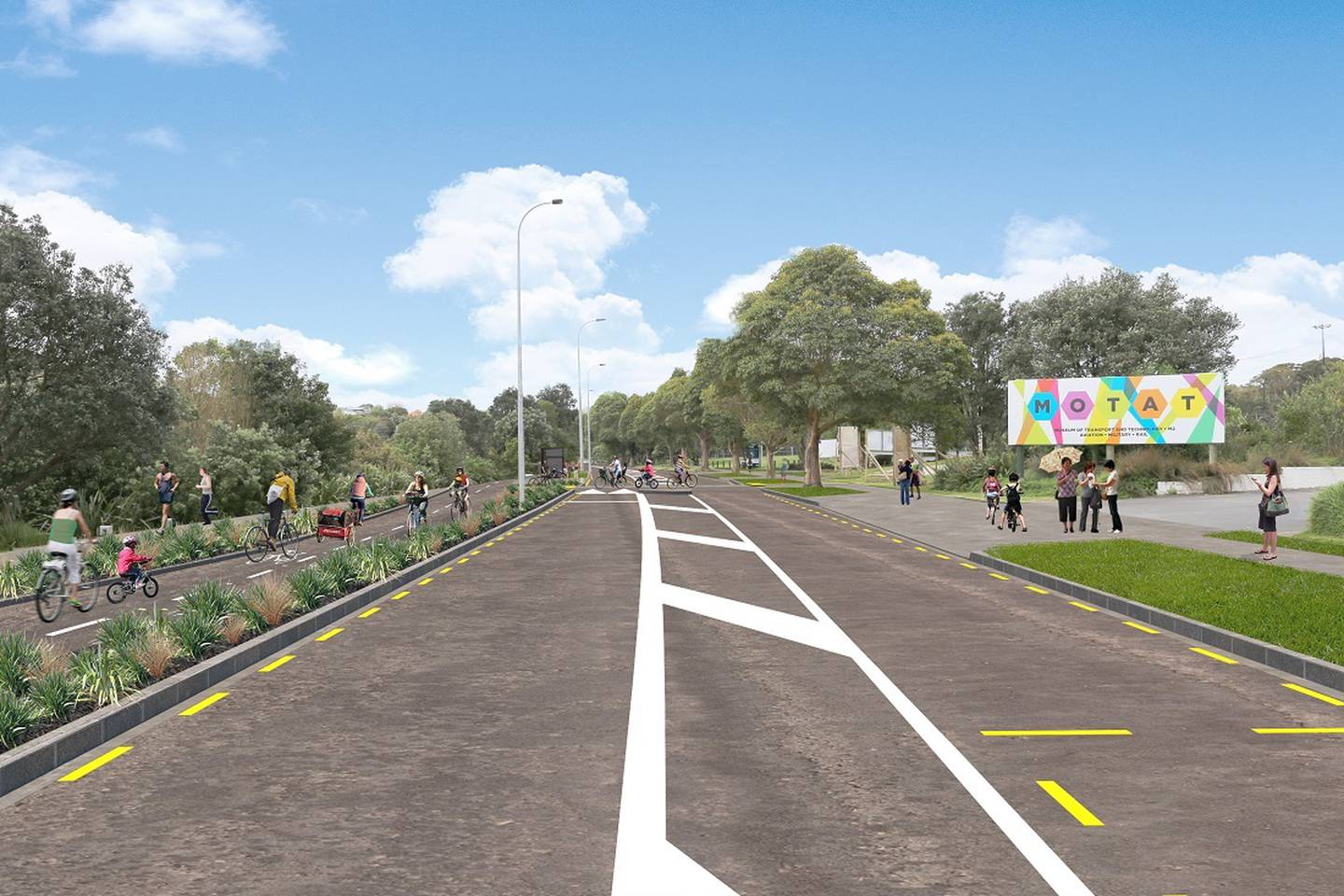 The plan calls for more cycleways like this proposed project between Pt Chevalier and Westmere. Photo / Supplied

Other proposals include more stringent parking restrictions in areas with frequent public transport and increasing bike parking in new developments.

The plan is also dependent on the council and AT lobbying the Government to change several laws for things like mandatory bike training in schools, limiting or removing parking for teachers, abolishing tax deductions for non-essential company cars and public subsidies for people and businesses to buy bikes. It also calls for congestion charging.

The $2b and law changes would deliver 260km of new cycleways and extra cycling connections in 14 areas by 2030. Auckland now has 350km of cycleways.

There is a lesser option costing $1b to deliver 150km of new cycleways and connections for seven areas.

The plan comes at a difficult time, with AT running out of money to operate public transport at current levels, Auckland Mayor Phil Goff saying the council faced hard times and several mayoral candidates promising an overhaul of AT and its "anti-car" agenda.

Bike Auckland chairman Tony Mitchell said Auckland had to get on and approve the $306m business case and a political commitment to get serious about the $1b and $2b options to achieve higher targets. "The council needs to look at how they are going to best achieve the outcomes for the people of Auckland, how are they going to make it a more liveable city, how are we going to design and build the city around people and not cars and achieve our emissions targets," he said.

Finding the extra $1.7b was a significant challenge, said Mitchell, but not one the city could shy away from, adding additional funds and tools could come in this month's Budget and the Government Emissions Reduction Plan.

Planning committee chairman Chris Darby said the extra $1.7b was significant but came with a very strong business case and the horrible tragedy occurring on the roads with ugly numbers of fatalities and serious injuries for cyclists.

"Cities from all around the world are grappling with the same problem ... and they are showing massive growth in cycling," he said.

Darby, who is on the political reference group for the business case along with councillors Pippa Coom and Angela Dalton, says the cycling plan is a challenge that has to be fronted up to and taken on. Automobile Association policy director Martin Glynn said Auckland "absolutely needs" substantial ongoing investment in cycling infrastructure to achieve a significant lift in the numbers who can choose to cycle around the city and do so safely.

"The key ... is ensuring investment is made in the right places and in the right way. Reallocating road space to create underutilised cycle lanes in the wrong places risks leaving cars idling in worse congestion and generating more emissions," he said.

National's transport spokesperson Simeon Brown told the Herald he expected people to "be outraged" to learn Auckland Council planned to spend $2b on cycle lanes.

"This is exactly the predetermined agenda behind AT's parking strategy, which will forcibly remove thousands of car parks and numerous car lanes across Auckland, and to replace these car parks and lanes with cycle lanes which no one will use," he said.

"Only 1.2 per cent of Aucklanders bike to work each day according to the last Census ... virtually unchanged from the previous Census."

According to Auckland Council's report, spending $2b on cycleways would only increase cycle use to 3 per cent of trips, Brown said.

"Auckland Council and the Government are so focused on forcing people out of their cars by spending billions on cycleways, when they should be focused on giving Aucklanders transport choices which are quick and efficient; and supporting efforts to increase the uptake of electric vehicles and low-emission vehicles by helping to make more EV charging points available."