Luxuriating in the heart of Lake Taupō, onboard a private fishing charter with Chris Jolly Outdoors, the bright spring sunshine had cast the great lake in a deep shade of oceanic blue, as the water glinted like freshly cut diamonds. The immensity of this inland sea, which encompasses the size of Singapore, transfixed me as much as the wrapround totems to a deep and dramatic history. The mighty snow-capped peaks of the volcanic plateau brooded on the horizon and Motutaiko Island seemingly floated in the middle of the lake like a mirage. I was lost in the reverie of this storied landscape, while trying my hand at landing a fish. It had been a long time between drinks, given the last time I had caught a fish was on Akaroa Wharf as a ten year old. And I had managed to bag myself a dog fish.

But I was in the best of hands because the Jolly family are synonymous with trout fishing in Taupō, ever since launching their outdoors excursions in 1980. With a wealth of activity options, I was living it up onboard their gleaming Levante Rivera 4000 Offshore Sedan, on a private luxury charter. Suitable for up to six guests, the glamour and elegance of this launch is irresistible, with a full-slate of amenities. My personal crew were impeccable hosts, effervescent and outgoing, serving eats and drinks, kitting me out with the fishing gear and catering to my every whim, while illuminating me greatly about the grandeur of the lake. As much as I’d love to brag about my personal fishing prowess, I only landed a decent-sized rainbow trout courtesy of their proven expertise and intuitive knowledge of the lake.

Whether you opt for a private fishing charter or join a scenic cruise with Chris Jolly Outdoors, an unrivalled highlight is to drool over the gobsmacking artwork that adorns the rock face of Mine Bay, tucked away in Lake Taupō. We got an intimate, up-close encounter, just metres away from this spell-binding rock carving called Ngātoroirangi. Back in the 1970s, Matahi Whakataka Brightwell’s grandmother asked him to create a likeness of her ancestor Ngātoroirangi on a totara tree. When Matahi arrived in Taupō, there was no totara tree to carve, so he ventured onto the lake for inspiration. Mine Bay’s rock alcove became the canvas for one of the most sublime contemporary carvings New Zealand has ever seen, towering 14 metres above the deep water, with a supporting cast of smaller sculptures honouring other ancestors and guardians. Wearing just speedos and safety glasses, while standing on bamboo scaffolding, it took four years for Matahi and three fellow artists to complete this heroic artwork. Weathered by the elements, Matahi is now planning some touch-ups. https://chrisjolly.co.nz/

I was itching to rock some of Taupō’s much-vaunted mountain bike trails and they won’t disappoint. I hooked up with Johnny Clapcott who recently switched from being a teacher ( a serious loss to our education system) to power up his bike hire and guiding business, Four B. Alongside rentals and guiding, Four B also offers accommodation and shuttle services to all the popular trails in the Taupō region. Based right across the road from the entrance to Craters Mountain Bike Park on Huka Falls Road, there’s over 50km of trails in the park alone, that span all grades and abilities. Equipped with a top-of-the-line ebike, Johnny led me on a gripping ride, that felt like a highlights reel of Taupō’s MTB offerings. 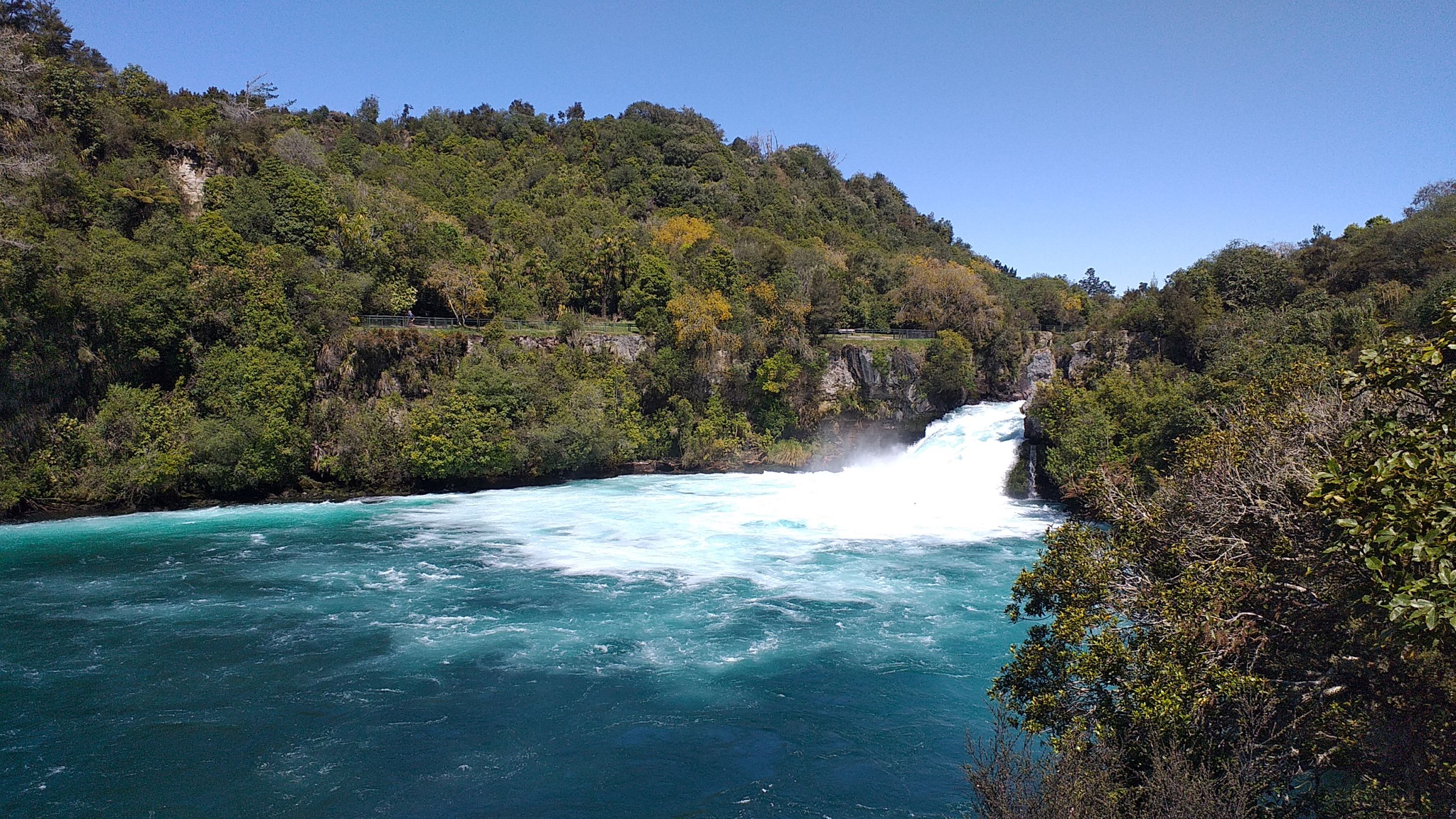 First up, we purred along some of the Huka Trails that vividly showcase the blinding beauty of those translucent aquamarine waters of the Waikato River as it charges from the lake to plunge down the falls. There are some stupendous vistas and soothing native bush sections, including punga tree groves, as we threaded higher and higher above the Huka Falls for a balcony view of nature’s intense splendour. The clarity of the Waikato River’s water at its inception (sorry Hamilton) is beyond belief. It’s like liquid cellophane as it rushes past you. Johnny remarked that the brilliance of pumice as a trusty filtration system underpins the water’s gin-clear quality. Whether you’re on foot or by bike, the Huka Trails lustily excel in accentuating the exuberant visual splendour.

We then hot-footed it into Craters Park, where those volcanic pumice soils deliver again, ensuring year-round riding on free-draining, grippy terrain. The trails thread through exotic pine and eucalyptus plantations, with a smattering of geothermal features adjoining the tracks, including gorgeous hot water streams, if you fancy a quick, curative dip. I do love thundering water works and I you need a further fix to complement Huka Falls, take a short ride down to the nearby Aratiatia Dam, which turns the narrow gorge into raging river within five minutes, several times a day.  Loud sirens ring out before the dam control gates open, before the trickling stream transforms into a torrent. It’s the next best thing to watching a flash flood, without any property damage.

For movie buffs, you’ll probably know that in The Hobbit: The Desolation of Smaug, the dwarves escaped from the captivity of the Elves by hiding in barrels which were thrown down stream.The Aratiatia Rapids on the Waikato River was one of the filming locations. Dam opening times between now and March occur four times a day at 10am, 12pm, 2pm and 4pm. Whether you’re after a self-guided or guided romp on the region’s bike trails, make FourB’s Hub your first stop. https://fourb.nz/

For a supremely languid contrast, treat yourself to the Wairakei Thermal Terraces which is a ravishing spot for a therapeutic soak. It’s such a dreamily beguiling setting, because the fern-fringed hot pools are tucked around the base of those wondrous silica terraces and waterfalls, which are constantly gushing and changing shape. To accentuate the tranquillity, pool access is restricted to adults only.  http://www.wairakeiterraces.co.nz/

With a rock-solid reputation as a premier tourist destination, Taupo’s dining credentials are underpinned by the sheer range of options. For a dinner to remember, Vine Eatery cannot fail to impress. This Mediterranean-style venue specialises in “Long Table Shared Plate Dinners, with a staggering tapas menu that spans around thirty option, ranging from fish and prawn wontons to big button mushrooms stuffed with spinach. Baked With Love, is a beloved eatery and cakery, locally owned by Kim and Scott Forsythe, who have fostered a rock-star reputation for their wholesome food, divine treats and sparkling customer service.

They’re renowned for their custom cookies which supply many businesses.  Try a custard brioche doughnut for sinfully good indulgence. And be sure to spoil your sweet-tooth with a call into Luna’s Gelataria, on the main street. Luna’s opened at the start of the year and this premium gelato store routinely triggers billowing queues down the footpath. The flavour range is constantly being tricked up, but the chocolate and almond butter gelato hit the sweet spot for me. 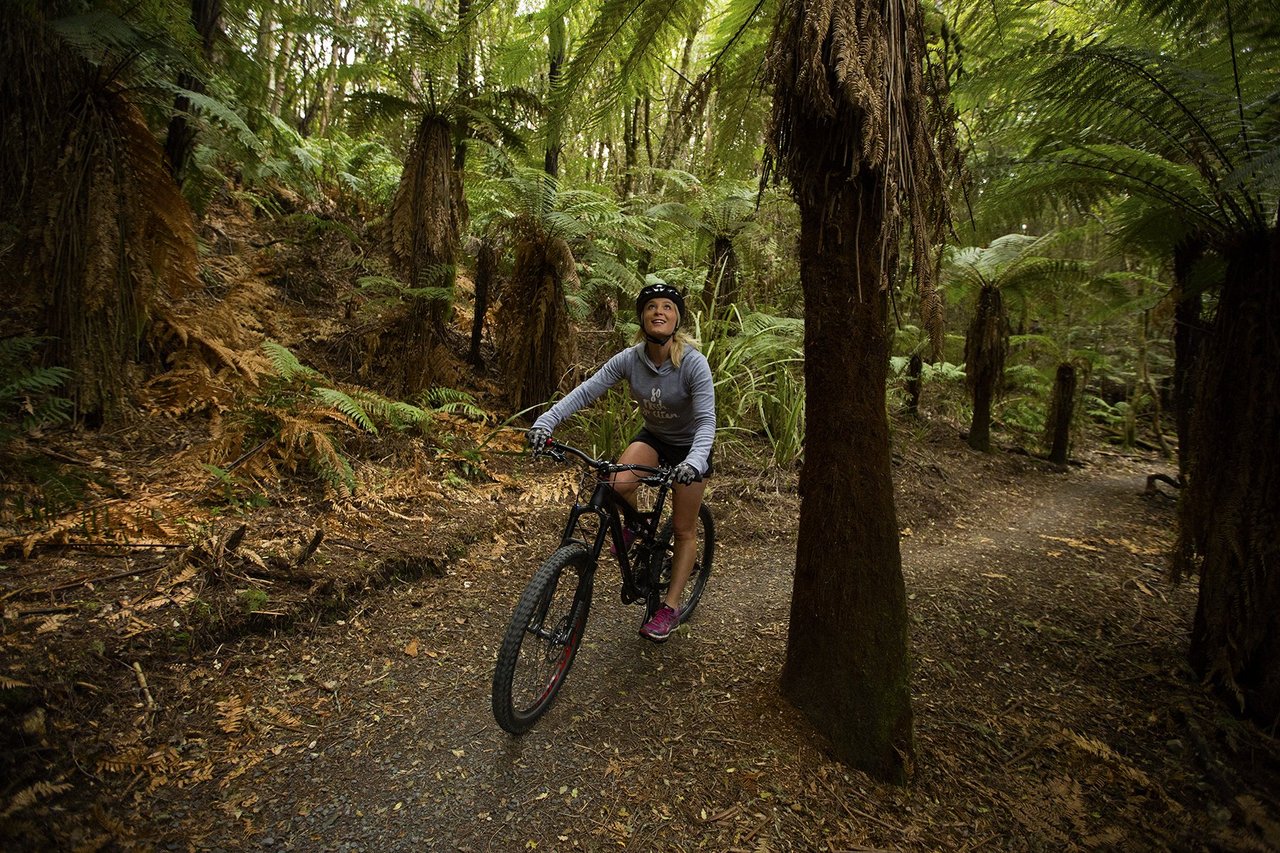 In a town richly blessed with inviting trails, the just upgraded Great Lake Walkway is a 4km-long pathway wrapped around the lakefront, which has been extensively widened and embellished with landscape design enhancements. It was my regular go-to for early morning and sundowner strolls, while staying at Millennium Hotel & Resort Manuels. This boutique property boasts an unblemished ringside seat on the lake’s crystal clear waters. From my balcony, I could have virtually flicked a line to reel in a rainbow trout. Luxuriously furnished and beautifully serviced by highly attentive staff, it’s a hotel that ticks all the boxes for location, style, class and unfailingly friendly service. Drink in a sunset from the lakefront bar or dine in the highly popular family restaurant, Beach 243. It has supreme alfresco seating options if the weather’s behaving. You’ll adore their “hot grotto” plunge pool. www.manuels.co.nz

Taupō is the sparkling jewel in the crown of North Island, power-packed with outdoors adventure from trout fishing and mountain-biking, to the mesmerising spectacles of Huka Falls and the region’s steaming geothermal treasures. Satisfy your love of nature and lust for adventure by packing your bags for a getaway to Great Lake Taupō. www.lovetaupo.com

I picked up my Avis rental car from Wellington Airport to free-roam the central North Island. The Avis Safety Pledge allows customers to pick up and drop off vehicles with minimal contact. This has been complemented with the recent launch of the Digital Check In option, dramatically speeding-up time at the counter. For risk-free bookings, select the Pay at Counter option. You can change or cancel, without fees, any rental reservations in New Zealand due to start before 1 March 2021. Plus, get up to 10% off your rental for all prepay bookings made before 20 December and sign up to the Avis newsletter to score a free upgrade. www.avis.co.nz